Until further notice, TKA's campus is closed including the weight room, gym, track, and all athletic fields.

TKA plans to resume school on Monday, August 24, 2020 with a combination of on-campus, in-person learning rotation with live-feed for remote learning.  Read more about reopening plans at www.tka.org/reopening.

If you have general questions, please contact Kriss Hayward, Director of Marketing and Communications: kriss.hayward@tka.org.

TKA Honors Spring Sport Senior Athletes
TKA athletics created this video as a way to honor spring sport senior athletes, since these seniors did not get a "Senior Night" experience due to the pandemic.  Congratulations SENIORS. Wherever you go, BE A KNIGHT!
The video is 12:00 minutes long, so here are the timestamps for each sport:

The King’s Academy is proud to announce the following graduates of the class of 2020 who have committed to competing in collegiate athletics at their respective colleges. TKA will continue to cheer you on, Knights! 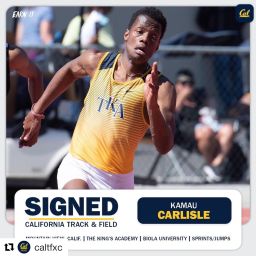 Considering the unique circumstances surrounding this year, the Athletics Department decided to give four sports awards. The awards were given during a "congratulatory drive-by" from the coach to each student. Congratulations Knights!

P.E. Uniforms:  The P.E. uniform ordering window is now open through Wednesday, July 15.  This is the only opportunity to order uniforms if you need new items for fall.  The uniforms have not changed. Details at www.tka.org/peuniform. Flyer here.

Spirit Gear Ordering Window Extended:  The ordering window has been extended to Friday, June 12, with delivery the end of June. This is the only order before school start. Check out the gear at www.tka.org/spiritgear. 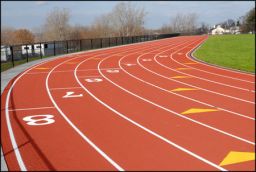 Senior Hailey Richey broke 17' feet in the Long Jump for the first time and placed second over on in the meet. She earned herself the 2nd spot on the All - Time record board for TKA as well.

Here are the overall results from the meet. Many of our runners and athletes improved even in the colder conditions. 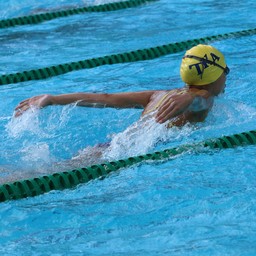 Last Saturday, 2/29, was a beautiful day in the water as our TKA Swim team entered its first competition of the season, the Spring Kickoff Invitational at Palo Alto High School. This squad of nearly three dozen swimmers is full of crafty senior vets and savage up-and-coming youngsters. In all, there is a lot of reason for excitement both for the present and future.

In her very first day of competition as a TKA Knight, Tristen Mina (9th), turned in a blistering time in the 100-yd butterfly and smashed the CCS-qualifying time by over 2 full seconds. Tristen also teamed up with sister and captain Kaitlyn Mina (12th), Abigail Ninan (9th/PSP), and captain Zoe Jacobs (12th), to completely ruin the CCS-qualifying time in the 200-yd Medley Relay.

The Mina Sisters did not stop there, however, teaming up again in the 400-yd Freestyle relay along with Abigail Ninan (9th/PSP), and Katie Vogel (11th/PSP), to clinch a CCS qualifier.

Abigail Ninan is a name we best all get used to hearing in TKA aquatics, because this PSP freshman is only just beginning her tear through the WBAL. Aside from contributing to two CCS-qualifying relay teams, Abby came in under the CCS cut time in the 50-yd freestyle. She'll be slicing the water looking for more qualifiers this Saturday at the small School Invite at Sacred Heart.

Other notable achievements include Sophia Groves (11th) who swam competitively for the first time ever, (as in ever), and whittled some time off her previous best in the 50 Freestyle. Daphne Han (9th) likewise achieved personal records in two of her three individual events, the 50 and 100 Freestyle, on her very first day wearing a TKA cap. Joshua Ridder (10th) broke the minute for the first time in the 100-yd freestyle, coming in at 58.92 seconds, and he also achieved a PR in the 100-yd backstroke. Captain Darren Chin (12th) took home a PR of his own in the 100 Back.

As it has across the community, illness has hit our team hard in the last month, but we are rounding into full-squad form just as we enter league competition, beginning with this Saturday's Small School Invite at Sacred Heart Prep. Please pray for good health and a continued joyful spirit surrounding this team.

There is a lot to be joyful about. 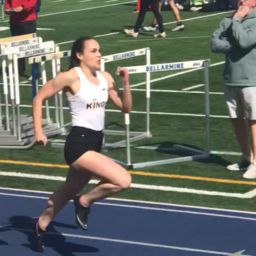 TKA had a great start to the track and field season at Bellarmine H.S on Saturday, Feb. 29.  Here is a link to the results.

Highlights:  Senior and team captain Kelaiah Moore led the team with two impressive performances in the sprints. She won the 200 meter race and placed second in the 100 meters. She ran 26.58 and 12.74 respectively and is now 2nd all time in the 200 meters and 3rd in the 100 meters on our school record board. Not far behind her was junior Molly Clarke in the 200 meters (3rd place). She finished in 27.60 which moved her up to #7 on the all-time board. Sophomore Aidan Oslob had a big PR in his first 1600 meters of the season and ran 4:42.79 (7th) and another PR in the 800 (6th) where he ran 2:07.79. Those performances placed him #8 and #9 on the all-time board in those events respectively. Joanne Yu tied for first place in the pole vault and vaulted 11 feet. Finally, Senior Lauren Mclane in her first attempt at high jump this year jumped 4 feet 8 inches which tied her for 2nd on the all-time school record board.

In summary, TKA had a great first meet and a plethora of personal bests. Next week the entire team of about 80 athletes will compete on Friday, March 6, at the famous Kezar Stadium in San Francisco at the Sunset Invitational.

God Bless you and a big thank you to all the athletes and parents that came out to support the team!
Sincerely, 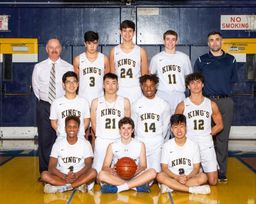 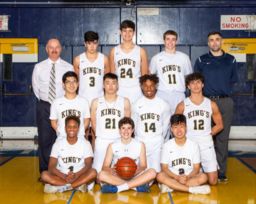 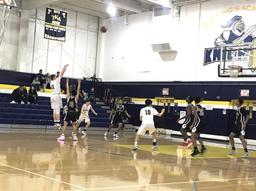 Taylor Brothers Lift Shorthanded  King's Academy Past Eastside: "Nearly everything that could have possibly gone wrong went wrong for the King’s Academy Knights on Tuesday afternoon, but brothers Jeffrey and Jon Taylor were there to save the day."  TKA defeated Eastside 53-50  Prep2Prep article 1/22/20 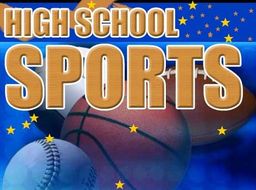 High School Spring Sports Sign-Ups: If you would like to participate in a high school spring sport, it's mandatory that you sign up online at www.tka.org/sportsignup. The online signup will be open from January 13-January 27. The sports available in the spring are: Baseball, Boys Golf, Softball, Boys/Girls Swimming, Boys Tennis, Boys/Girls Track and Field, and Boys Volleyball. Remember, you must register by the deadline to avoid a $50 late registration fee.

ImPACT Concussion Testing - High School Only: ImPACT testing is required every other year for all high school athletes (If your son/daughter has taken it any time after May 2018, it is still valid for the 2019-2020 year. Therefore, he/she will not need to retake it). Those who have been concussed within the last year will also need to take a new baseline test. This test is computerized and typically takes 30-40 minutes to complete. 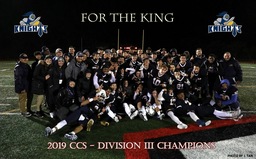 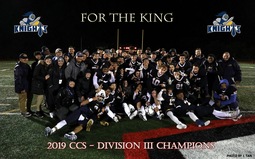 Watch a video of the game here!

"Unbelievable," Lavorato said. "We had the game won like four or five times. It's testament to our defense and a testament of how courageous our kids are."

"I don't care who, where what, when — it doesn't matter," said Lavorato, who claimed his seventh CCS title this decade — five at SHP from 2010-15 and back-to-back trophies at TKA, last year's Division V winner. "We're playing in a NorCal championship game. That is really cool."

We just learned TKA will be HOSTING a CA regional bowl game, which is amazing! If TKA wins this game, we will move on to a State Championship game. Details below.

FOR THE KING: TO GOD, THE GLORY!

The King's Academy Knights reigned against Aptos High School, winning 31-30, and now move on to the Championship Finals game vs. Terra Nova Tigers! 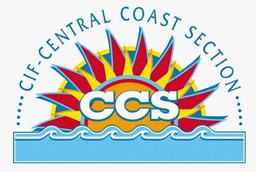 TKA Knights won this past Friday night against San Mateo, 42-14, and now advance to the Division III Semifinals against Aptos High School. Details below! 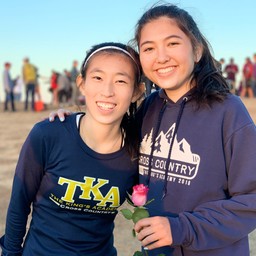 Cross Country CCS Results
Junior Sophia Lee finished 15th in the Division IV CCS race in a time of 20:27. She ran an excellent race. Her sophomore year and frosh year she placed 44th in the race both times. Her hard work and dedication paid off over the last year as she moved up over 29 places this year.
Sophomore, and first year runner Sara Chamness, had an excellent debut as well at CCS and finished 27th overall in a time of 21:35.
In the boys race Senior Tyler Hartley finished 44th overall in a time of 17:35.
Congrats to the three CCS representatives from TKA!
Results can be found here - https://live.recordtiming.com/meets/4772
(Sophia Lee on left in photo) 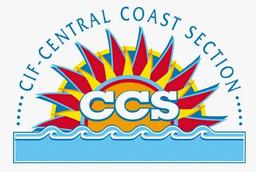 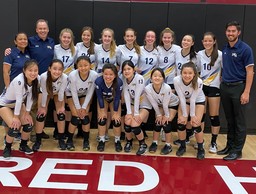 TKA Girls Varsity Volleyball Made it to CCS Quarterfinals!

TKA girl's varsity volleyball team made it to the CCS tournament quarterfinals. Although they lost to Sacred Heart Prep, the team put up an amazing fight after a great season. Way to go Lady Knights...We're so proud of you! 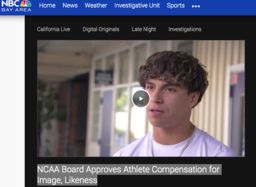 TKA running back, Noah Short, and Athletic Director, Joe Maemone, were interviewed for this story: "NCAA Board Approves Athlete Compensation for Image, Likeness" 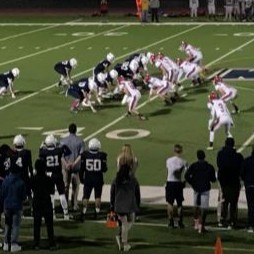 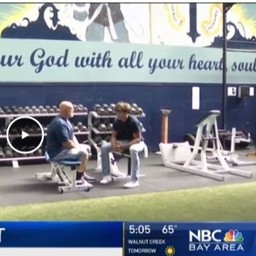